In Russia, It’s Not the Economy, Stupid

LONDON — The Russian economy is in trouble — “in tatters,” President Obama has said — so why aren’t Russians more upset with their leaders? The country underwent a major recession recently. The ruble lost half of its value. And yet, according to a leading independent pollster in Russia, President Vladimir V. Putin’s approval ratings have consistently exceeded 80 percent during the past couple of years.

One reason is that while the Russian economy is struggling, it is not falling apart, and many Russians remember times when it was in a much worse state. Another, perhaps more important, explanation is that Mr. Putin has convinced them that it’s not the economy, stupid, anymore. 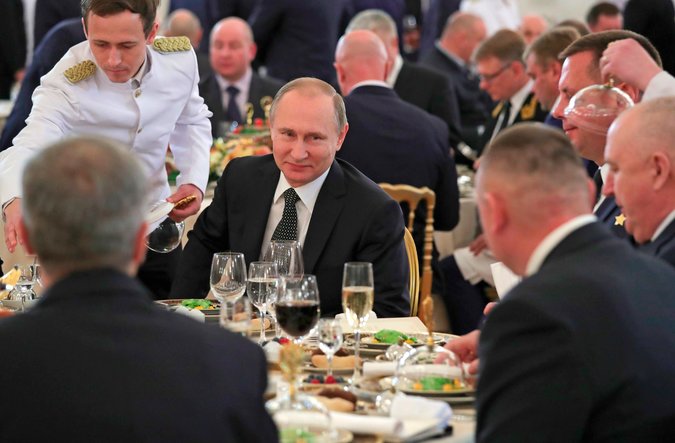 President Vladimir V. Putin of Russia attending a reception at the Kremlin in Moscow this month.CreditPool photo by Mikhail Klimentyev.

Thanks largely to the government’s extensive control over information, Mr. Putin has rewritten the social contract in Russia. Long based on economic performance, it is now about geopolitical status. If economic pain is the price Russians have to pay so that Russia can stand up to the West, so be it.

It wasn’t like this in the 1990s and 2000s. Back then the approval ratings of Russian leaders were closely correlated with economic performance, as the political scientist Daniel Treisman has demonstrated. When the economy began to recover from the 1998 financial crisis, Mr. Putin’s popularity increased. It dipped when growth stalled. It climbed again in 2005, after the global price of oil — Russia’ main export commodity — rose, foreign investment flowed in and domestic consumption boomed. And it fell substantially after growth rates slowed in 2012-13.

Russia’s intervention in Crimea in early 2014 changed everything. Within two months, Mr. Putin’s popularity jumped back to more than 80 percent, where it has stayed until now, despite the recession.

One might argue that these figures are misleading: Given the pressures faced by the Kremlin’s political opponents, aren’t respondents in polls too afraid to answer questions honestly? Hardly, according to a recent study co-written by the political scientist Tim Frye, based on an innovative method known as “list experiments.” It found that, even after adjusting for respondents’ reluctance to openly acknowledge any misgivings about specific leaders, Mr. Putin’s popularity really is very high: around 70 percent.

During the 2015-16 recession, G.D.P. fell by more than 4 percent and real incomes declined by 10 percent. That is significant, but much less serious than, say, the 40 percent drop in G.D.P. that Russia experienced during the first half of the 1990s. Despite a dramatic decline in oil prices and the burden of sanctions imposed by Western governments after the Crimea crisis, the Putin administration has managed to avert economic disaster by pursuing competent macroeconomic policies.

As the sanctions cut off Russia’s access to global financial markets, the government set out to cover the budget deficit by undertaking major austerity measures and tapping its substantial sovereign funds. In early 2014, the Reserve Fund (created to mitigate fiscal shocks caused by drops in oil prices) and the National Welfare Fund (set up to address shortfalls in the pension system) together held the equivalent of 8 percent of G.D.P.

The government also adopted sound monetary policy, including the decision to fully float the ruble in 2014. Because of the decline in oil prices and large net capital outflows — caused by the need to repay external corporate debt and limited foreign investment in Russia — the currency depreciated by 50 percent within a year. Although a weaker ruble hurt the living standards of ordinary Russians, it boosted the competitiveness of Russia’s companies. The Russian economy is now beginning to grow again, if very modestly — at a projected 1 to 1.5 percent per year over the next few years.

This performance comes nowhere near meeting Mr. Putin’s election-campaign promises of 2012, when he projected G.D.P. growth at 6 percent per year for 2011-18. But it isn’t catastrophic either, and the government has managed to explain it away.

Thanks partly to its near-complete control of the press, television and the internet, the government has developed a grand narrative about Russia’s role in the world — essentially promoting the view that Russians may need to tighten their belts for the good of the nation. The story has several subplots. Russian speakers in Ukraine need to be defended against neo-Nazis. Russia supports President Bashar al-Assad of Syria because he is a rampart against the Islamic State, and it has helped liberate Aleppo from terrorists. Why would the Kremlin hack the Democratic Party in the United States? And who believes what the C.I.A. says anyway?

The Russian people seem to accept much of this or not to care one way or the other. This should come as no surprise. In a recent paper based on data for 128 countries over 10 years, Professor Treisman and I developed an econometric model to assess which factors affect a government’s approval ratings and by how much. We concluded that fully removing internet controls in a country like Russia today would cause the government’s popularity ratings to drop by about 35 percentage points.

But our model also confirmed that in all countries, democratic and nondemocratic, citizens are less likely to approve of their government if economic growth is low.

So now that the recession is over and the price of oil has risen, is the social contract in Russia likely to change back to one based on economics any time soon? That seems unlikely.

The current approach has served the government well enough, and it could still. Russia has become an indispensable nation in world affairs again, while managing to weather economic pressures which have now eased. At the same time, the government so far has shown little willingness to undertake the deep reforms needed to modernize and diversify the economy, and really spur growth.

The government recently unveiled its budget for 2017-19, projecting more major austerity measures. Expenditures will be cut by more than 10 percent in real terms over the next three years. Russia’s G.D.P. growth is forecast to remain below the global average. That hardly is a glowing performance, and so the government may well prefer to keep selling itself to the people by invoking not prosperity but geopolitics and national pride.